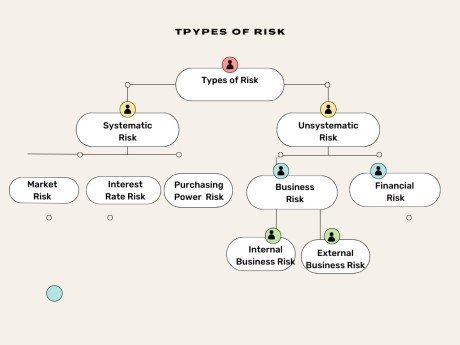 Unsystematic Risk. also known as “diversifiable risk,” as it can be managed and controlled, unlike “systematic risk.” which is difficult to manage and control as it is widespread and covers the entire system. The unsystematic risk may be specific to an industry or company and is caused by one or more of the following:

2) Technological advancement in the process of

4) Lack of human resources, and

Specific causes need to be probed, company- and industry-wise, separately, to pinpoint and take remedial action.

Other factors leading to unsystematic risk may relate to

1) Financial leverage, i.e., the Debt-Equity Ratio (DER) of the companies varies from each other,

2) Sources of funds and repayment of the loans also involve an element of risk, and

3) Sometimes the product may go out of fashion or become obsolete, which is a threat or risk for the company or industry.

The unsystematic risk may be categorized/subcategorized as follows:

Business risk is a part of the Arunsystematic risk, which basically comes from the Vi operational activities of the business. Due to certain inbuilt deficiencies in the operations of a company, its competitive advantage over the rivals is lost affecting the force of its expansion and/or smooth flow of revenue. This fact is ultimately expressed in the form of poor ‘Operating Income’ and ‘Expected Dividends’ of the company.

External business risks are the risks caused by circumstances, which are external to a company’s business. The company has no control over these circumstances or factors, which are (i) Social and regulatory factors, (ii) the Monetary policy of the Central Bank of the country, (iii) the Fiscal policy of the Government, (iv) the Business cycle, (v) General economic conditions, etc.

The financial risk of a company is closely related to the manner in which the funds have been raised to design its capital structure. The financial strength of a company depends upon the level and stability of its earnings. An inappropriate “Capital Structure’ may not be able to ensure stable earnings and as a result of such variation in earnings, the company would be exposed to financial risk.

i) Earnings of the company remain higher than the cost of capital, and

Financial risk may be classified into the following sub-divisions:

Credit risk arises from the possibility of a borrower defaulting in timely payments, as and when it falls due or makes payment with delay. Failure on the part of a borrower in repayment is a credit risk, which directly affects the profitability of the lender. Even a delay in repayment of borrowed funds carries a cost element with it.

ii) Currency Risk: The possibility of a loss due to unfavorable movements of the exchange rate in the foreign exchange market, either short-term or long-term, is referred to as the ‘Currency Risk. A company engaged in the business of export, import, or forex dealing or has foreign subsidiaries may be a victim of ‘Currency Risk. It may also affect a company that has competition with a foreign entity in the domestic market.

‘Country Risk’ is a collection of risks associated with doing business in a foreign country. It varies from one country to another. Some countries have risks, high enough to discourage foreign investment. These risks include political risk, regulatory risk, and economic risk.

Political risk arises from o the possibility of downfall in the financial health of a country as a result of (i) an unstable Government, (ii) a change of Government, or (iii) distress regarding the Government’s actions. Political risk is highest in countries with political instability. Sudden change in a Government creates an environment of To doubt and unpredictability with regard to the new Government’s policies about exchange control, treatment with foreign business houses, etc.

The risk arising out of the tension that new regulations would be introduced or the existing regulations would be implemented in a more rigorous manner is termed as ‘Regulatory Risk Possibility of a country’s Central Bank to increase the CRR (Cash Reserve Ratio) or SLR (Statutory Liquidity Ratio) requirements for banks operating in that country is an example of the ‘Regulatory Risk’.

The possibility of a country’s economic conditions becoming negative and having a damaging impact on its financial health, especially on inflation, interest rates, and forex rates, is termed an ‘Economic Risk’.

For example, if the Government of a country decides to increase its spending by resorting to market borrowing in a big way, business opportunities for the Government suppliers would increase in the short run. However, the financial consequences, in the long run, would be a high level of an interest rate for commercial and private borrowers.

‘Liquidity Risk’ is the probability of a security market (bond or stock) being non-marketable, making it difficult for the holders of such security to sell them at a fair price.