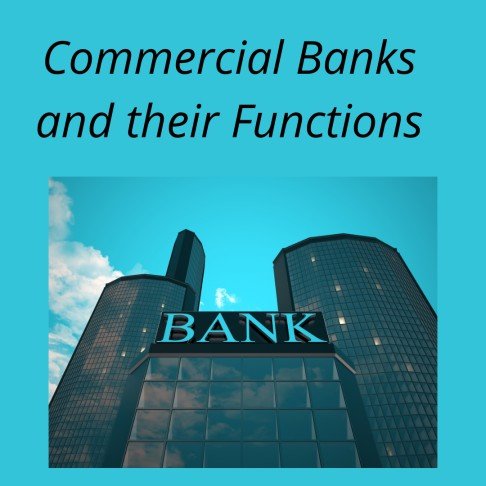 Commercial Banks and their Function. Banks which engage themselves in all types of banking activities, viz acceptance of deposits, granting of loans and advances , credit creation, investment operations, various agency functions, etc. are known as commercial banks. As they are established as joint stock companies , they are also referred to as joint stock banks.

Besides providing short-term loans for meeting out the day-to-day operating requirements of industries, they also extend mid-term and long-term loans for setting up new industries and expansion activities to be undertaken by existing industries.

Primary Functions of the commercial banks include the following :

There are following three types of deposits which a commercial bank accepts:

In this account depositor has to deposit a particular sum of money at once and there is a restriction that he/she can not withdraw his money before certain period, e.g. 1 year, 2 year, etc. This account offers the highest rate of interests among all the types.

In this account depositor has to deposit a particular sum of money every month and in this he/she cannot withdraw his money before a stipulated time period.

This account is mostly hold by those who have to do multiple transactions in a day such as businessmen. However, these accounts do not yield any interest for the depositor because bank has to fulfil the cash demands of depositor any time by maintaining sufficient amount of cash.

Rate of interest on saving account is low but it promotes the habit of saving among public. This is the reason behind its popularity among every citizen. This account poses certain limits in front of depositor such as, limited number of withdrawals in a week is allowed.

Out of the deposits received by bank, certain percentage (as specified by RBI) of it is kept as cash reserve. The amount left after that is provided against certain interest to needy persons in the form of loans. The bank checks all the required documents thoroughly in order to ascertain the credibility of the borrower, before lending him the money. The most common way of lending is by:

The depositor of current account in the overdraft facilities is allowed to withdraw more than the agreed limit. These type of loan is very popular in India. For example, the owner of the ousiness has 40,000 as the limit of his current account but he requires 80,000 for bearing the expenses. Than he can withdraw the additional amount of 40,000 from the bank and the amount will be given to him by issuing cheques. The bank will charge interest from the overdrawn amount by the depositor.

It is very famous type of lending in the modern bank. In this at the time of requirement of money the bank can discount the bill. The commission is deducted and the bank will pay the present price of the bill to the holder. These bills give liquid asset to the bank which can be changed into cash so it is profitable investment for the bank. The central bank can also re-discount the discounted bill for the commercial banks when they require money. These bills are safe and secured bills as when the bill matures the bank can secure the payment by the party which will accept the bill.

In this the bank will give loans for very small period i.e. of 7 days to the borrowers like dealers or brokers in the stock market against the collateral securities like stock or equity shares, debentures, etc., given by them. The payment of such is made after the short time period so they are known as money at call or call money.

These are also known as participation loans or consortium finance. These loans are given by banks to the traders, industrialists and also to agñculturists in return of collateral securities. These term loans are for 1 to 10 years. They help in providing intermediate or working capital funds to the borrowers. The term loans are also provided by two or more banks against same security.

The banks also provide loan to the households of a small amount for buying the durable consumer goods like television sets, refrigerators, etc. They are also require for the personal needs lilce payment of hospital bills etc. the loan is given in lumpsum amount and the payment by the borrower is done in instalment for small time period. It is also provided for bearing expenses like marriage, funeral, etc.

It is another form of bank advances. There are packing credits provided to exporters for a small-time period, export bills purchased/discounted, import finance-advances against import bifls, financial help to the self-employed, loan to the public sector, loan to the cooperative sector and loans to the weaker sections of the community at discount rates.

The main function of the bank is to create credit. The banks gives money to the traders and manufacturers. The banks also help in creating money. The bank deposits is referred to as the money for the bank and they are as good as cash because they can be used for purchasing the goods and services and for paying debts.

The banks credits the amount required by the borrower as the loan and the borrower withdraw the required amount from the cheque. By the help of this there is creation of deposit which will lead to creation of credit. Sayers says “banks are not merely purveyors of money, but also in an importmt sense, manufacturers of money”

a) Investment of Funds:

Apart from granting loans and credits, banks also invest their surplus fund in government securities in order to yield interest from it. There are several provisions that bind commercial banks to necessarily buy the government securities because this fund ensures the liquidity in banks and protect them from the threat of loss in near future.

b) Promote the Use of Cheques:

All the commercial banks provide cheque leaf to its customers for free or against a nominal cost. Banks also encourage the use of cheques among customers because it is an easier task for the banks to facilitate the transactions done through cheques than cash. The cheque is found to be the best and most widespread credit instrument among all others of money market.

Purchasing and selling of currencies is itself a business, i.e., people do it to make more money by taking advantages of changing rates of exchange. Some of the banks also perform this function to facilitate the needs of its customers.

The commercial banks have the branches in various part of the country which help in transferring funds from one place to another by the help of bank drafts, mail transfers or telegraphic transfers on small nominal commission charges. The postal money orders or other instruments has helped in giving the economical way of transferring money and has also helped the various business.

Secondary banking functions of the commercial banks include the following:

Banks facilitate the customers’ needs of transferring amount to any other account at any other place. Banks render this service against a commission, which depends on the amount to be transferred. The tool used by bank for this is referred to as ‘Bank Draft’.

The funds of a customer are owed by any other bank. The bank collects his fund from that bank’s account and deposits it in its own account. For example, clearanc  ocedure of cheques.

iii) Purchase and Sale of Shares and Securities for its Customers:

The bank also acts as depository panicipant and plays a role of intermediary in the process of buying and selling of shares and securities of private and government companies. For example, Demat accounts.

iv) Collecting Dividends on the Shares of the Customers:

The shares and other securities purchased by the customers yield certain interest or dividend. Bariks credit these amounts to the accounts of customers.

The insurances purchased by customers generally require premium after a regular interval of time. Customers may instruct their banks to do timely payments of premium on their behalf. Similarly, they can instruct for other payments too.

vi) Bank acts as the Trustee and the Executor:

Bank also renders the service of keeping the ‘wills’ of its customers safe. It may also be authorised to take the actions as written in the will, after the death of its customer.

Banks alsò act as an income tax consultants for their customers by providing them with valuable suggestions for tax savings. If a customer asks the bank to prepare the income tax statement for him, the bank does thís favour but charges a certain fee.

Banks, against a certain fee, also act as a representative, agent, or correspondent of the customer in the processes like buying tickets, obtaining passports, making payments, etc.

Other Functions of Banks:

Following are several other functions performed by the bank:

Banks also offer the service of lockers to their customers, which provide safe custody to their valuable items such as important documents, expensive metals, etc. The facility of the locker is given to the customers against a fixed annual rent and a few other terms and conditions.

A traveller’s cheque is an instrument issued by banks to its customers. t is basically an instrument that can be used in place of or can be exchanged with cash while travelling to different countries. This instrument reduces the risk of theft of money as it can be used only after endorsement by the signature of the holder.

* Giving Information about its Customers:

Banks have the access to financial details of their customers, which they can share with other parties.

For example, banks help businessmen in knowing the credibility and financial position of parties who are associated with businessmen in credit transactions, i.e., retailers who purchase in bulk on credit.

Banks also gather updated information and data related to the economy, money, trade and commerce sector, banking, etc., and communicate it with the help of booklets, flyers, pamphlets, etc. This information educates the customers about the economic and business environment and trends, which helps them in several ways, e.g., businessmen can use this information during the formulation of their policies.

* Accepting Bills of Exchange on behalf of Customers:

Banks also accept the bills of exchange or promissory notes of their reliable customers. Any exchange bill which signifies the acceptance of the bank on it becomes discountable throughout the money market. Hence, customers get benefitted by this service of the bank.

Banks are a very important part of the economy and they are well with the economic environment of the country. Hence, it can provide valuable suggestions to its customers regarding financial concerns.

Banks, especially the public sector and nationalised banks, facilitate the execution and fulfilment of national policy objectives of the country such as elimination of poverty, centralisation of wealth, eradication of unemployment, etc. Banks do special arrangements and formulate special schemes for achieving socio-economic objectives such as providing soft loans and loans with lesser rate interests to farmers, persons associated with handicrafts and other small-scale businesses, artisans, etc.

2 thoughts on “Commercial Banks and their Function”